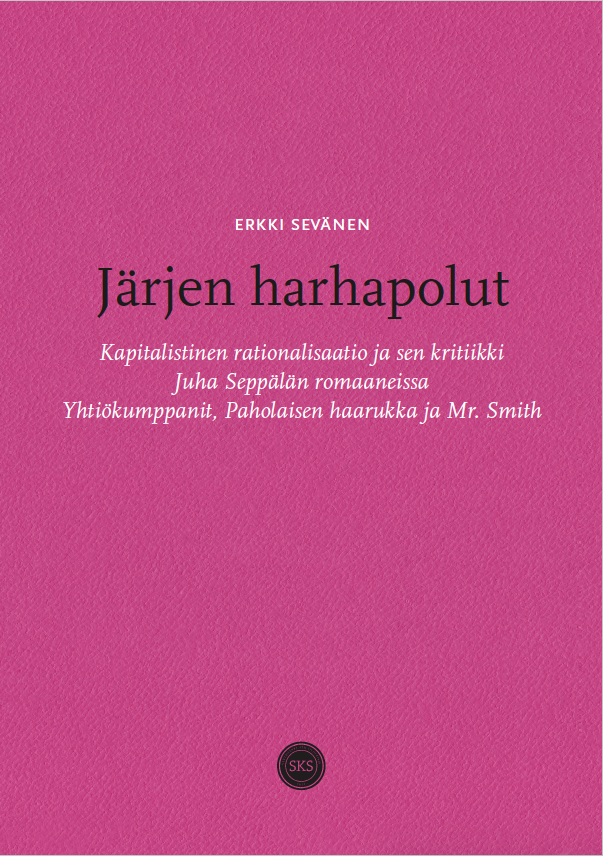 Juha Seppälä’s early literary works, published in the 1980s and in the early 1990s, usually described spiritually lonely men who suffered from an existential loss of meaning and serious alienation problems in the modern world. After this, Seppälä turned to deal with the transformation of the Finnish way of life and its cultural base, until after the turn of the new millennium he began to critically judge society’s ongoing marketization process. This study analyses his capitalism-critical works, particularly his novels Yhtiökumppanit (The Partners, 2002), Paholaisen haarukka (Devil’s Fork, 2008) and Mr. Smith (2012). These works do not, primarily, consider contemporary market capitalism from a class perspective, although this sort of perspective is also included in them. They are, above all, critical of market capitalist rationality. According to Seppälä, the basic problem of modern economic profit-seeking lies in the fact that in its unchecked form it is largely indifferent with respect to existential, moral, social and ecological values and principles. Free market economy or market capitalism has, therefore, a destructive influence on individuals, communities and ecological systems. The novels at issue emphasize that due to this it is also, in a deeper sense, incapable of producing existentially meaningful ways of life.