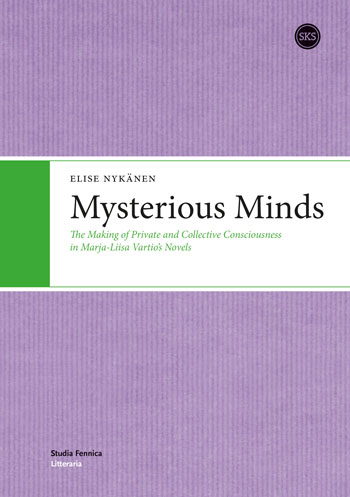 This study examines the narrative tools, techniques, and structures that Marja-Liisa Vartio, a classic of Finnish post-war modernism, used in presenting fictional minds in her narrative prose. The study contributes to the academic discussion on formal and thematic conventions of modernism by addressing the ways in which fictional minds work in interaction, and in relation to the enfolding fictional world. The epistemic problem of how accurately the world, the self, and the other can be known is approached by analyzing two co-operating ways of portraying fictional minds, both from external and internal perspectives. The external perspective relies on detachment and emotional restraint dominating in Vartio’s early novels Se on sitten kevät and Mies kuin mies, tyttö kuin tyttö. The internal perspective pertains to the mental processes of self-reflection, speculation, and excessive imagining that gain more importance in her later novels Kaikki naiset näkevät unia, Tunteet, and Hänen olivat linnut.

In the theoretical chapter of this study, fictional minds are discussed in the context of the acclaimed “inward turn” of modernist fiction, by suggesting alternative methods for reading modernist minds as embodied, emotional, and social entities. In respect to fictional minds’ interaction, this study elaborates on the ideas of “mind-reading,” “intersubjectivity,” and the “social mind” established within post-classical cognitive narratology. Furthermore, it employs possible world poetics when addressing the complexity, incompleteness, and (in)accessibility of Vartio’s epistemic worlds, including the characters’ private worlds of knowledge, beliefs, emotions, hallucinations, and dreams. In regards to the emotional emplotment of fictional worlds, this study also benefits from affective narratology as well as the plot theory being influenced by possible world semantics, narrative dynamics, and cognitive narratology.

As the five analysis chapters of this study show, fictional minds in Vartio’s fiction are not only introspective, solipsist, and streaming, but also embodied and social entities. In the readings of the primary texts, the concept of embodiedness is used to examine the situated presence of an experiencing mind within the time and space of the storyworld. Fictional minds’ (inter)actions are also demonstrated as evolving from local experientiality to long-term calculations that turn emotional incidents into episodes, and episodes into stories. In Vartio’s novels, the emotional story structure of certain conventional story patterns, such as the narratives of female development and the romance plot, the sentimental novel, and epistolary fiction, are modified and causally altered in the portrayal of the embodied interactions between the self, the other, and the world. The trajectories of female self-discovery in Vartio’s novels are analyzed through the emotional responses of characters: their experiences of randomness, their ways of counterfactualizing their traumatic past, their procrastinatory or akratic reactions or indecisiveness. The gradual move away from the percepts of the external world to the excessive imaginings and (mis)readings of other minds (triggered by the interaction of worlds and minds), challenges the contemporary and more recent accounts of modernism both in Finnish and international contexts.