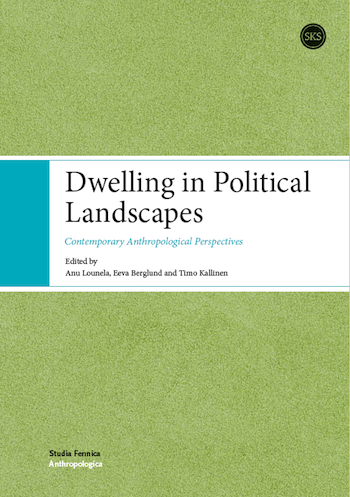 People all over the globe are experiencing unprecedented and often hazardous situations as environments change at speeds never before experienced. This edited collection proposes that anthropological perspectives on landscape have great potential to address the resulting conundrums. The contributions build on broadly phenomenological, structuralist and multi-species approaches to environmental perception and experience, but they also argue for incorporating political power into analysis alongside dwelling, cosmology and everyday practice. The book’s 13 ethnographically rich chapters explore how the material and the conceptual are entangled in and as landscapes, but it also looks at how these processes unfold at many scales in time and space, involving different actors with different powers. Thus it reaches towards new methodologies and new ways of using anthropology to engage with the sense of crisis concerning environment, movements of people, climate change and other planetary transformations. Dwelling in political landscapes: contemporary anthropological perspectives builds substantially upon anthropological work by Tim Ingold, Anna Tsing and Philippe Descola and on related work beyond, which emphasises the ongoing and open-ended, yet historically conditioned ways in which humans and nonhumans produce the environments they inhabit. In such work, landscapes are understood as the medium and outcome of meaningful life activities, where humans, like other animals, dwell. This means that landscapes are neither social/cultural nor natural, but socio-natural. Protesting against and moving on from the proverbial dualisms of modern, Western and maybe capitalist thought, is only the first step in renewing anthropology’s methodology for the current epoch, however. The contributions ask how seemingly disconnected temporal, representational, economic and other systemic dynamics fold back on lived experience that are materialised in landscapes.

Foremost through studying how socially valued landscapes become irreversibly disturbed, commodified or subjected to wilful markings or erasures, the book explores a number of approaches to how landscapes are entangled in the ways people gather and organise themselves. Mindful of troubling changes in Earth Systems, all the authors argue from empirics. They show that processes of landscape change are always both habitual and laden with choices. That is, landscape change is political. Undoubtedly, landscape politics is bound up not just in how nature has been imagined, but in long histories of consumption. Today, an alarming quest for raw materials and energy continues to change both political and geological formations. Meanwhile dominant socio-political aspirations mean the exploitation of staggering volumes of cheap resources like fossil fuels in order to sustain economic processes that are as taken-for-granted as they are unsustainable. Like anthropology generally, this book attends to the contextual details buried in such planet-scale pictures.

Building on traditional anthropological strengths, many authors consider the details of how the past is brought into the present – or erased from it – in material flows and sensory awareness, as well as in narratives that are explicitly linked to particular landscapes. Colonial identity formation and the different ways that it links with how landscape is viewed and managed (for instance for resource development for a global market), whether in Southern Africa, Israel/Palestine, the Canadian arctic or Indonesia, is a particularly striking example of how to talk about landscape is also to talk about past, present and future. And as the idea that we inhabit the Anthropocene becomes commonplace, the discipline can meaningfully discuss the current era as one of disavowed ruins as well as of poorly understood multispecies relations.

To think of landscape as historically produced across multiple scales, does not mean ignoring its sensuous qualities let alone its role in cosmological systems. On the contrary, the analyses in the collection attend to the ways people’s movements through the landscape produce it as a material and conceptual resource. Taken together, the book’s ethnographic analyses take on board the unprecedented conditions under which people everywhere are having to make sense and forge relationships to the worlds they inhabit. Since landscapes are not what they used to be, neither can anthropology be.